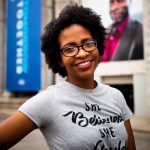 Paulette is a digital media reporter and producer for Michigan Radio. She started as a newsroom intern at the station in 2014 and has taken on various roles in that time, including filling in as an on-air host.

Before working at Michigan Radio, she was the news editor of The Washtenaw Voice at Washtenaw Community College. She has an associate degree in journalism from WCC. And she is currently a senior at Eastern Michigan University, pursuing a bachelor’s degree in media studies and journalism. She’s a proud news junkie.

When she isn’t producing content for Michigan Radio listeners, she enjoys writing and spending time with her two young daughters.