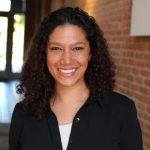 Mercedes Mejia produces interviews for Stateside. She’s also and arts an culture reporter. Mercedes relocated to Michigan from New Mexico, where she earned her BA in Journalism and Latin American Studies.

She began in public radio as a reporter at KUNM in Albuquerque. She brings extensive video production skills from her work at Univision and Edit House Production.