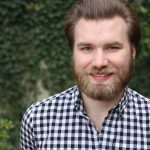 Tyler Scott is the weekend afternoon host at Michigan Radio, though you can often hear him filling in at other times during the week. Tyler started in radio at age 18, as a board operator at WMLM 1520AM in Alma, Michigan, where he later became host of The Morning Show. He studied political science and graduated from the University of Michigan with a bachelor’s degree in 2016.

When he’s not trying to find a good story to listen to or read, Tyler especially loves listening to a wide range of music, from contemporary rap to Dad Rock and Joan Baez, even a little bit of older country (absorbed during his early days in radio). Tyler’s a big football fan – Go Blue! He loves visiting Michigan’s many gorgeous state parks, and writing amateurish poetry.