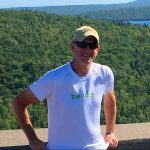 Since 1995 John has created Michigan-based editorial cartoons for the Grand Rapids Business Journal, the Grand Rapids Press, and MLive Newspapers. His cartoons are currently featured at MichiganRadio.org and are syndicated to newspapers through the Michigan Press Association. John is an active member of the Association of American Editorial Cartoonists. You can view an archive of his editorial work and other cartoons at Auchtoon.com.

In addition to cartoons and essays for Michigan Radio, John works as a technical communication specialist. He has worked for a variety companies, from startups to large corporations, and has operated his own business. The job basically is the same as cartooning — putting words and images together to communicate. But in this case, John knows enough not to draw funny pictures of his boss or client. (Well, now he does.)

John grew up on the east side of the state near Flint, graduated from Michigan Tech in da UP, and has lived in West Michigan since. He vacations Up North every summer and shovels lots of snow every winter. After his wife, he is the biggest Tigers fan in the family. He drinks Vernors when his tummy hurts.