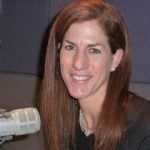 Anne Curzan is the Geneva Smitherman Collegiate Professor of English and an Arthur F. Thurnau Professor at the University of Michigan. She also holds faculty appointments in the Department of Linguistics and the School of Education.

As an expert in the history of the English language, Anne describes herself as a fount of random linguistic information about how English works and how it got to be that way. She received the University’s Henry Russel Award for outstanding research and teaching in 2007, as well as the Faculty Recognition Award in 2009 and the 2012 John Dewey Award for undergraduate teaching.

Anne has published multiple books and dozens of articles on the history of the English language (from medieval to modern), language and gender, and pedagogy. Her newest book is Fixing English: Prescriptivism and Language History (2014). She has also created three audio/video courses for The Great Courses, including “The Secret Life of Words” and “English Grammar Boot Camp.”

When she is not tracking down new slang or other changes in the language, Anne can be found running around Ann Arbor, swimming in pools both indoor and out, and now doing yoga (in hopes that she can keep running for a few more years to come).