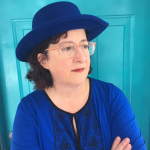 Tracy Samilton covers energy and transportation, including the auto industry and the business response to climate change for Michigan Radio. She began her career at Michigan Radio as an intern, where she was promptly “bitten by the radio bug,” and never recovered.

She took over the auto beat in January, 2009, just a few months before Chrysler and General Motors filed for bankruptcy.

Tracy’s reports can frequently be heard on Morning Edition and All Things Considered, as well as on Michigan Radio.

Her coverage of Michigan’s Detroit Three automakers has taken her as far as Germany, and China. Tracy graduated from the University of Michigan with a degree in English Literature.