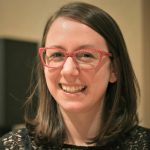 Lindsey’s work has been repeatedly recognized by the Michigan Association of Broadcasters and Michigan Associated Press. She co-wrote and co-hosted the 2018 Peabody award winning podcast, Believed, about how former gymnastics doctor Larry Nassar got away with sexual abuse for decades.