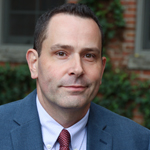 Doug Tribou joined the Michigan Radio staff as the host of Morning Edition in June 2016. Doug first moved to Michigan in 2015 when he was awarded a Knight-Wallace journalism fellowship at the University of Michigan in Ann Arbor.

From 2006 until August 2015, Doug worked at NPR member station WBUR in Boston. During that time, he spent seven years as a reporter and producer for Only A Game, NPR’s weekly sports show. From 2006 to 2008, he was a news anchor at WBUR.

Doug’s reporting has appeared on All Things Considered, Marketplace, and Weekend Edition. He has also made numerous appearances on NPR’s Here and Now.

Doug also has extensive experience in commercial radio. He served as program director at ESPN Radio Boston (WAMG/WLLH) from 2005 to 2006, and as program and news director for stations owned by Saga Communications in Portland, Maine.

Doug lives with his wife and two daughters in Ann Arbor. In his spare time, he enjoys exploring Michigan with his family, basketball, running, golf, books about history, and detective novels.