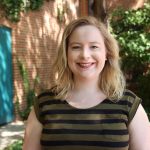 April Van Buren is a producer for Stateside. She produces interviews for air as well as web and social media content for the show.

Before landing at Michigan Radio, April worked as a producer for Current State at WKAR and a reporting intern and producer at WBEZ in Chicago.

April graduated from Harvard University in 2012 with a degree in American History and Literature (aka the most liberal artsy of liberal arts degrees). She is a die-hard 30 Rock fan and once saw Tina Fey do the chicken dance at a party.