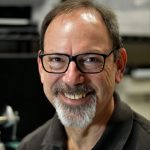 Bob began his radio career when he joined Michigan Radio in 1996 as the weekend morning on air host. Due to his experience in Los Angeles as a recording studio installation and maintenance technician, he began splitting his time with the engineering department, and moved into engineering full time when he accepted the position of Chief Engineer.

Bob was instrumental in Michigan Radio’s transition from analog to digital, in the move from their original studios atop the LS&A Building to the current Argus Building facility, and in the building of the new WVGR transmitter facility.

One of Bob’s favorite assignments was as engineer for Michigan Football on Michigan Radio from 1997-2001 where he got to see games from every press box in the Big 10, watch Michigan win a share of the National Championship at the Rose Bowl, witness the turn of the millennium from an empty hotel bar in Miami, and experience one of the most hair-raising plane rides flying into Penn State.

Outside of work Bob is an accomplished singer, guitarist and award winning songwriter. He can be seen performing around Southeast Michigan.

Check out where at bobskon.com.