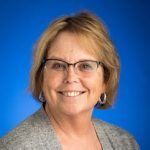 Peggy J. Watson began her career at Michigan Radio in 1983 as a Production Assistant after graduating from Western Michigan University. At that time, Michigan Radio was primarily a classical music station.

In addition to classical music, the station aired All Things Considered, lectures from the University of Michigan and carried Michigan football every Saturday in the fall. In those days,

Peggy recorded and edited the lectures, engineered the football games and supervised a group of interns that helped with the station’s production duties.

Peggy is currently the Operations and Traffic Manager at Michigan Radio. In addition to managing the stations operations, Peggy is very involved with production, fund raising and continues the intern program she started 36 years ago. Although Michigan Radio has gone through several changes in the past 36 years, one thing that hasn’t changed is Peggy’s dedication to the station and her passion for radio.

Peggy was recently honored with the Michigan Association of Broadcasters Pioneer Award for her long service to the station and the broadcasting industry. Peggy lives outside of Ann Arbor with her husband and one large Shepadoodle.