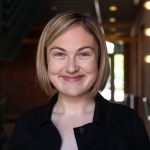 Clark began her collegiate studies at George Washington University in Washington, D.C.  She holds degrees in Communication Studies and Political Science from the University of Michigan and lives in Ann Arbor, where she was born and raised.