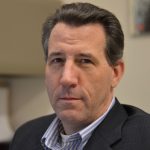 Vincent Duffy has been news director at Michigan Radio since May 2007.

In his years  leading the Michigan Radio news room, the news team has won scores of national, regional and state awards including Murrow Awards,  Sigma Delta Chi awards, a duPont award and others.

Duffy is the Chair of the Radio/Television/Digital News Foundation (RTDNA), the charitable arm of the world’s largest organization representing electronic journalists. He has twice been Chair of RTDNA in 2012, and 2017.

Duffy graduated from Kent State University (Kent, Ohio) with degrees in political science and telecommunications, and then toured the world as a radio journalist covering news in Australia, Switzerland and South Africa.

After returning stateside he earned a master’s degree in mass media from Miami University of Ohio while working as a reporter at WMUB in Oxford.

In 1997 Duffy returned to Kent State University as news director of WKSU.

In addition to his work for WKSU and NPR in Ohio, Vince hosted the weekly television news program  NewsNight Akron on PBS 45 & 49. His first television documentary, “Sharing Democracy: The Akron/Subotica Partnership”, received the prestigious Telly Award and added Serbia to the growing list of destinations Vince has traveled to cover news. Vince also produced and hosted several PBS 45 & 49 specials, political debates and documentaries.

Duffy has won seven national Edward R. Murrow awards for his radio journalism, as well as a Sigma Delta Chi award, a National Headliner award, a national Unity award, and many others.

In 2008 he added Ghana to his list of countries visited when he covered a University of Michigan delegation led by U of M President Mary Sue Coleman.

Along with his obvious love of travel, Vince enjoys playing piano, photography and martial arts. He has second degree black belts in both Tae Kwon Do and Shotokan Karate.