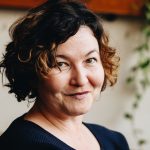 Prior to her arrival in Michigan, April was the host of the weekly show State of Wonder on Oregon Public Broadcasting (OPB) for the past six years. Before that, she was the Morning Edition host and a reporter at OPB, covering beats including government and legal affairs, changing demographics and the arts.

Hosting Stateside brings April back to her midwest roots. She is originally from Ohio and worked as the Morning Edition host and Public Affairs Director at WCPN Ideastream (Cleveland) and WYSO (Yellow Springs). Her husband Ryan grew up in Ann Arbor, and she has spent time in the state every year for the past 13 years, visiting places from Detroit to Marquette.

April has been the recipient of a number of awards including the 2006 New York Festivals – Bronze Medal for podcast; The Ohio Society of Professional Journalists Best Social Justice Reporting Award; and a Finalist in the 2007 Public Radio Talent Quest, a nationwide competition to select new public radio hosts and shows.